Now that we have finished comparing execution on Win32, Win64, and OSX, we are finally going to compare performance on mobile devices!  We created a mobile app version of the Hello World project.  It is directly comparable to the desktop version, using TMemo, TListBox, TButtons, and TLabels (see Figure) 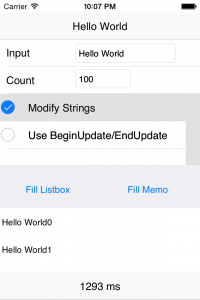 Because the speed of the mobile devices is so much slower than our desktop machines, we tested adding 10, 100, and 1000 items or lines instead of 100, 1000, and 10000 like the desktop versions.  This was only necessary when the BeginUpdate and EndUpdate methods were not called.

Please notice that the FMX charts have a logarithmic y-axis for execution time.  With FMX, execution times vary so greatly between a small number of items and a large number of items that filling a TListBox or a TMemo with 1000 items would swamp out the other results and make them appear tiny and indistinguishable.

Our first tests are with filling the TListBox on an iOS device.  Since Delphi XE4, Delphi has supported deploying to iOS devices.  Note that the Delphi XE4 app was compiled with debug.  Delphi XE5 and XE6 can deploy release versions directly to the device without requiring certificates.  However, this was not true with Delphi XE4 but as we will see, it doesn’t seem to have slowed the app down.

Our last platform is Android.  Note that only Delphi XE5 and XE6 can target this platform.

No clear winner emerges for the Android platform, though Delphi XE6 is the all-around better Delphi for Android.  If you look at the filling TListBox chart, Delphi XE6 is faster at filling a TListBox with less than 1000 items and no BeginUpdate/EndUpdate.  However, when the BeginUpdate and EndUpdate methods are called, Delphi XE5 is faster (157 ms at 100 items, 941 ms at 1000 items, and 41 seconds at 10000 items.

When filling a TMemo, Delphi XE5 and Delphi XE6 are essentially tied except for one important caveat.  Delphi XE5 is almost twice as fast as XE6 at adding 10 lines (and no BeginUpdate/EndUpdate); however, that does not mean much as it is only a difference of 22 ms.  The glaring discrepancy is that Delphi XE6 is over 7x faster than XE5 in filling a TMemo with 1000 lines (and no BeginUpdate/EndUpdate).  It takes 20 seconds for XE6; over 2 minutes later XE5 finishes.

Stay tuned for more next week… 🙂

Next week, we are going to show speed results from sample applications using the Inference Engine Component Suite (IECS).  The IECS is a large component library (96K lines of engine code and another 48K LOC for dialogs) for developing expert systems with Delphi.  It uses lots of interfaces, generics, parsing/string manipulation, and 100s of classes.  It works from Delphi 2010 through XE6 and for all platforms that Delphi supports.  It should provide very interesting non-visual execution results.

We are going to follow that up with tests using the RiverSoftAVG SVG Component Library (RSCL).  The RSCL will only test Delphi XE2 through XE6.  However, it renders SVG files using low-level canvas operations (gradients, paths, text, etc) and is available for VCL and FMX.  It uses GDI+ for VCL (which is a software renderer with comparable features to the FMX TCanvas) so it should provide a good test of the FMX DirectX and OpenGL hardware-based rendering.  The RSCL is also able to build SVGs using the FMX shape primitives (TRectangle, TPath, TText, etc); it should reveal any optimizations (or lack thereof) Embarcadero has been doing with the low-level primitives from which most FMX controls are built.

That’s it for this week.  I hope you are enjoying this series of blog posts.  Happy CodeSmithing!