In Delphi XE8, Embarcadero broke (or perhaps more correctly, broke further) how radial gradients are rendered on Windows using their FMX.Canvas.D2D.pas file.  This issue affects anyone who uses a radial gradient and the center point/focal point to not be in the exact middle of the shape being rendered.  For the RiverSoftAVG SVG Component Library, SVG tend to define these types of gradients all the time so that is how I became aware of the regression.  Prior to XE8, the FMX.Canvas.D2D unit created a radial gradient brush whose center was modified by the Brush.Gradient.RadialTransform.RotationCenter.  This allowed the SVG library to correctly render radial gradients that had their center or focal point not equal to 50%, 50% (i.e., the center).  The screenshots below show the old pre-XE8 behavior: 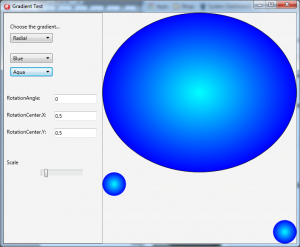 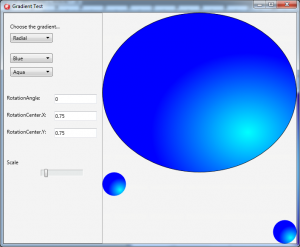 In the screenshots above, we set up the top Ellipse’s gradient brushes using RotationCenter and copied the brush to the canvas to draw 2 additional ellipses:

The code from XE7 and before in the FMX.Canvas.D2D.pas looked like this:

However, there were a couple of things sorta right about the code:

In XE8, Embarcadero changed FMX.Canvas.D2D.pas to closely mirror their FMX.Canvas.GDIP.pas:

All modifications to the radial gradient now occur in the UpdateBrushMatrix which applies the AGradient.RadialTransform’s transformation matrix to the brush’s matrix. In some ways, this could be seen as an improvement as theoretically, you can modify the radial gradient how ever you like by using the RadialTransform.Matrix. However, there are some BIG problems with this approach:

The screenshots below show the problems with the new, XE8 behavior: 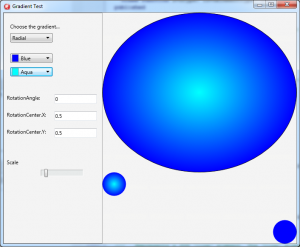 Radial Gradient in XE8 (Centered Origin 50%, 50%). Note how the bottom right ellipse has lost its centered gradient because it is drawn in a rectangle that is not at the origin. 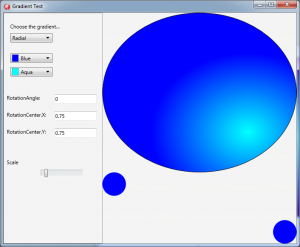 Radial Gradient in XE8 (Origin Down Right 75%, 75%). By clever manipulation of the transformation matrix, we set the focal point to (114,94), which works for the top Ellipse. However, the same gradient does not work for either of the other ellipses since their rectangles are different.

Note that the FMX GDI+ never worked, but since that canvas was used rarely, this issue was ignored by the RSCL.

Interestingly, Embarcadero only made this change on Windows. Testing on OSX and Android reveals that the previous behavior, using RotationCenter, is still in effect. (Note XE8 is giving us problems deploying to iOS so we could not test its behavior)

What does this mean for the RiverSoftAVG SVG Component Library?

First, because there is no easy way to set the gradient center point or focal point correctly and even if we did, the behavior would break as soon as a SVG element was moved or resized, we are not going to change the code for how radial gradient’s are set at this time. Using the default Embarcadero XE8 DirectX2D code on Windows for radial gradient with a non-centered focal point, the gradient will be displayed incorrectly. On other platforms and earlier versions of Delphi, the radial gradient will work as well as it ever did.

The Solution (for Everyone)

However, you can get back proper rendering of Radial Gradients on Windows for your compiled applications by hacking the FMX.Canvas.D2D.pas file. Perform the following steps:

Alternatively, you can download the changed file.  As a bonus, the above code uses the AGradient.RadialTransform.Scale property as a proxy for setting the radius of the gradient (the RSCL has set the scale based on a SVG element’s radius since February 2015 but it is unused without the above hack for each platform and version of Delphi you are using).

Well, that’s it for now.  I hope this helps others.  Happy CodeSmithing!